The Battle for Minas Tirith 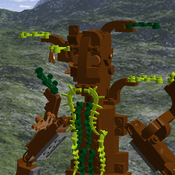 This is my representation of the Battle for Minas Tirith, as depicted in the the film, the Return of the King. As far as I am aware, the build is secure, and I have attempted to make this as realistic and true to a Lego set as possible, containing an assortment of plausible bricks.

In relation to current or recent sets, it currently contains 1881 bricks (including 11 minifigs). You can do comparisons...

The Battle for Minas Tirith has a total of 5 rooms and 5 war machines (including a Trebuchet on the wall). The rooms from top left to bottom right are as follows:

The Trebuchet is more of a representation at the moment. I might update it, or leave it for Lego to change if or when it comes to that.

There are several functions included in the model. A battering ram function, in which the gates can be broken. A Denethor one, where you can make Denethor 'jump' off the rock face. The Siege Tower has the ability to hook onto the lower wall. It is also possible to light the beacon of Minas Tirith with a light-up brick.

Minifigs are as follows:

A Mountain Troll and 2 horses are also included.

Please click on the smaller images above to view different angles of Minas Tirith and the war machines!

Please support or comment, not just for this project, but to demonstrate the hopes for a Minas Tirith Lego set! Thanks