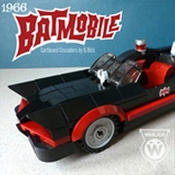 Decision on Our Ability to Produce this Project

We have chosen to archive your project and no longer consider it for production based on its overlap with 76052 Batman™ Classic TV Series – Batcave, which was developed independently of LEGO Ideas submissions. Your project will remain visible on LEGO Ideas, but in a status where it can no longer be supported or commented on. This way fans can still admire your creation.

As it typically takes 12-18 months to develop and release a LEGO product, situations like this are likely where a LEGO Ideas project overlaps a product in development. The closer an Ideas project is based on an existing LEGO license or product line, the greater this risk will be. For more info, please refer to the LEGO Ideas Guidelines regarding overlaps with our product pipeline.

We're sorry to be the bearers of this disappointing news, and we hope to see more projects from you soon!

Congratulations! Your project's deadline has been extended.

On April 15, we announced in a blog post that LEGO Ideas is extending the time limit for projects to reach 10,000 supporters. Because your project originally reached at least 1,000 supporters within its first year (365 days), we've automatically added 182 days to your countdown clock, from the date your project was originally posted. If your project has over 5,000 supporters at the time of this comment, you've earned an additional extension of 182 days! Note: since these extra days are based on your project's original post date (and not today's date), you may see less than the maximum possible days reflected on your countdown clock.

For more information, see the time limit section of the Project Guidelines and House Rules. We hope you enjoy the extra time to reach 10,000 supporters, and best of luck on your project's continued journey.

Holy Strawberries Batman, this Batmobile is just terrific! With it's Bat-rader, rocketlaunchers, mobile crime computer, bat-shutes, and other great utilities, the joker wouldn't stand a chance!

Good luck as you keep the citizens of Gotham safe and approach 10,000 supporters!