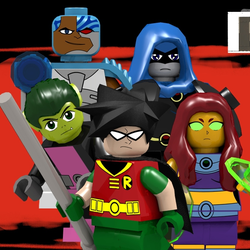 From the world of Steven Universe, it's the crystal gems with the gem temple. The temple consist of 908 bricks with an interior containing five rooms, ( The beach house, warp room, Garnet's room, Amethyst's room, and Pearl's room.) The set also includes Peridot's gem war ship which consist of 86 bricks, and Greg's van which only consist of 14 bricks.

The characters included in this set are:

Hope you guys like this set and support it!