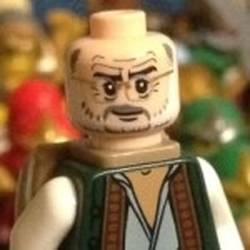 My name is Duncan. As a child, some of my most enjoyable memories are of watching nature specials and documentaries. This developed into both a respect and desire to preserve nature. I took a special interest in large predators, such as polar bears. Which are now endangered.

Among the most memorable of nature specials are those fortunate enough to capture unexpected encounters with wild animals. I wanted to capture that feeling of surprise and wonder in LEGO. A 3D still frame out of a documentary, showing a Polar Bear Encounter both above and below the arctic ice.

Transparent light blue panels were used to ensure the polar bear's lower body and other fish swimming by could clearly be seen.  The white polar ice is detachable. And the transparent light blue surface ice that it sits on is hinged for easy access and play below the water line. The expressions on the Eskimo minifigure's heads were chosen to express the surprise of the fisherman and sense of stunned wonder of his partner, as he holds back their husky from jumping into the water.

I had this idea for a set. And with the support and prompting of friends, I am now submitting it here. But submitting the Lego Idea is not enough. If this Idea gets the needed 10,000 votes, makes it past LEGO Review, and into production. I would like my percentage of the profits donated to the World Wide Fund for Nature (WWF). To be put toward their ongoing conservation efforts in preserving polar bears.

Now I need your help. Tell your friends. Tell your family. Let's get those 10,000 votes! LEGO fans like us get a unique set. And the real world polar bears win too! Let's do it!