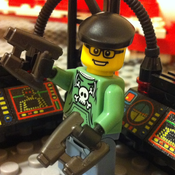 Uh-oh! It looks like the dreaded space pirate ‘Dredd Bard’ has targeted a ground surveillance team with his ‘Goliath’ Class Attack Sled! Good thing a Planetary Defender is nearby to save the day!

This set idea is based on Lego Classic Space and includes 4x vehicles and 4x mini-figures:

The Attack Sled also separates into to modules, so the pilot can make a getaway if the main engine & weapons section is damaged. Scenario is a space pirate going after a ground surveillance team. A space fighter is nearby to intercept the pirate and (hopefully) save the team. Set has been designed for optimum playability. Please check out the photos and I hope you like it enough to support it. The landing platform is for photo purposes and not an intended part of the set. Pardon the bad photos, I am not a photographer (nor do I have the other fancy rendering software others are using). Thank you for looking!