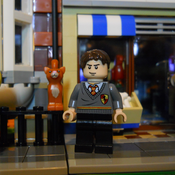 The set can hold 2- 3 minifigs and cargo. The  helicopter is about 29 bricks long and 6 bricks wide. It includes; rotating propellers, a pilot seat, a stretcher/ bench, and a small compartment for cargo. The tail and "nose" are both brick- built. The nose is made of 16 different pieces. The Huey ch- 135 has twin turbine engines, a double rotor propeller, and skid landing gear. The Rescue Helicopter set has all of these features as well.