Emmet's apartment from The LEGO Movie 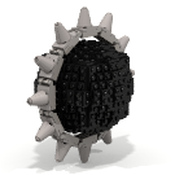 So my first project on LEGO Ideas. The LEGO movie is what brought me back to LEGO so I wanted to create a nice first project.

The movie starts out with President Business acquiring the Kragle, but Emmet's apartment is the part which really attracted me to the movie. Everything is made out of real lego bricks, and the apartment is the moment where this really struck my attention. I recently acquired Benny's spaceship, and I really missed Emmet's apartment as a real LEGO set. So I decided to install Lego Digital Designer, LLD2POV and POV-ray, and started bricking away.

I feel that the model I created is highly accurate. I took multiple screenshots of the movie, counted bricks and studs, and I learned the basics of the program this way.

Emmet's bedroom, the hallway, and the living room are very accurate. They have got a lot of screentime, and also feature different angles. This way I could analyze the scenes and create a faithful representation of the scenes and the decor. I really like the smooth plates which show Emmet's life and his ordinary walking paths.

The bathroom and the kitchen don't have a lot of screentime, so it was very hard to recreate them. There is a shot with depth of field of the kitchen, and I see something on top of the slanted orange brick, it looks like a transparent thing, which might resemble a vegetable steamer or something similar. The bathroom is also barely in view. I saw that they used the Buoy as a toilet seat (brilliant idea), and that there is a long pink sink with a knife in it (toothbrush).

There appears to be something like a boiler on top, but it's really hard to make out what it is. Also, the refrigerator is a bit of a mystery, and the microwave on top seems to be one brick with a window in it, but I can't find anything in designer like it. The pole on the bar is there, but LEGO digital designer won't let me place it there, so I omitted it. I attempted to use custom decals, but there are no 4x2 tiles with prints, so I cannot render them with POV-ray.

The LEGO movie was about President Business and the Kragle. Unfortunately, in order to really create this model, you will need to apply some Kragle yourself. The tiles in the bathroom for instance are glued to the walls. I attempted to work around this but that wasn't as easy as I expected since Lego Digital Designer will not allow things to be placed randomly. I now use 1x1 bricks for this, but I'm hoping I will find a solution for this. This is also the reason why the television isn't there.

The interior will not fit inside the building we see when Emmet goes onto the balcony. I did a recreation of the exterior, but the removable wall contains over 400 parts, which is just too much. I omitted this in the renders as well.

The plants also have the same problem, the green plant things just float inside their respective buckets, maybe this can be fixed using a transparent 1x1 round plate with a hole to put them in.

Current part count is at 1600. I had a lot of plans to include the hallway outside Emmet's apartment, but the part count will be too high. I am hoping that I can do updates and reduce the part count down to around 800-1000.

I would really love this set to be available. If I reach 5000 supporters I am going to do a real build of this set. I already got my hands on an Emmet in Pyjama minifig (this is a rare item that was given to visitors of the 3D version of the movie I think) Also, I would love to have feedback on missing parts and mistakes I might have made (the door in the kitchen for instance is also still a bit of a mystery)