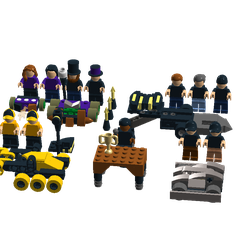 "They're the most heavily armored ground vehicles in the Imperial Army."
"...so what you're saying is that you have a thorough knowledge of just how screwed we are."

―Thane Kyrell and Yendor, just before the Battle of Hoth, from Wookeipedia

The All Terrain Armored Transport (AT-AT) was the most powerful vehicle in the Imperial army, and now for the first time ever there is a completely pose-able and accurate mini-model of this great behemoth. This model is composed of 260 bricks, 122 in the vehicle and 138 in the stand, with 3 places of articulation in the legs and a ball and socket joint in the neck allowing for full head pose-ability. The ship also has open-able flaps on the side of the ship that let troopers out in the movies, and the stand includes snow and rocks to create an environment similar to Hoth's.