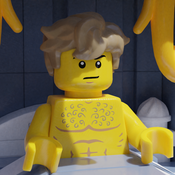 »Unrivalled to this day for her performance and aesthetics, Concorde will remain a pilot's grail for eternity.«
- Béatrice Vialle, Concorde pilot
My admiration for Concorde prompted me to rebuild this aircraft with Lego. I knew before, that it would be a big challenge as Concorde has curves and shapes to perfectly slip through the air. The construction of the delta wings was maybe the most difficult thing like it was for the engineers of the actual Concorde. My goal was to avoid sharp edges or rough surfaces. While trying to achieve this, I was struggling with a lot of different techniques and often ended up with unsatisfactory results. But step-by-step a promising solution evolved. And finally - after hours and hours of trial and error - the wing met my expectations. As you can see in the photos, there is no single knob on the surface and the leading edge of the wing is rounded - almost like the real Concorde.

»The only thing that tells you that you’re moving is that occasionally when you’re flying over the subsonic aircraft you can see all the Boeing 747s 20,000 feet below you, almost appearing to be going backward.«
- John Hutchinson, Concorde captain
But the wings were just the beginning. There was a whole plane to add. The next tricky part was the nose. As it is already challenging to manage the fuselage curves, the nose is an outstanding challenge as height and width at the same time undergo a slight change till they meet in the tip of the nose. There were a lot of possibilities to destroy the aesthetics of the whole model.

»I was impressed with the shape and construction and the general feeling of looking at the future.«
- Philip Cairns, Concorde ground engineer
After I created all parts, I had to put them together. And this was a challenge in itself. I had to make sure the model was stable. One of the main difficulties was the connection of the delta wings with the rest of the aircraft. How to make sure, they don't fall apart? I built the wings with several connectors over the whole length. So it was possible to create a solid construction. Stability is a crucial aspect. My model became finally real. All the photos you see are taken from the actual model. It includes fully working landing gear and the iconic droop nose.

»Concorde will never really stop flying because she will live on in people's imagination.«
- Jean-Cyril Spinetta, former Air France chairman
Finally, it is all about aesthetics. Concorde is the perfect symbioses of power and beauty and this should also be emphasized by a Lego model. In the end, it is you to decide about this model.