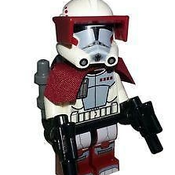 There's not a lot to say about this. I got this idea when I was working on another forge for the knights and got the idea of making a viking version. Similar to other builds in the past, the big difference is that its a viking theme so there are viking weapons and snow around the forge.

Think of the location being in a snowy viking Village, being outside on the main road. I believe that this will make a great small LEGO set as it dives back into the Viking LEGO theme. As I said its small, meaning that its a quick and easy build making it target younger LEGO fans but can still be liked by people of all ages!