Set idea - SK003 Steam Knight "Wizard of the Green". What if a wizard had access to steam engine technology?

Fiction - The Wizard of the Green is a sorcerer who lives in the forest. After learning the engineering skills of the Dwalves, he is able to construct a suit of armour to defend his home from dark magic, soldiers and monsters. Able to channel his knowledge of elemental magic via the armour's hands, he can project lightning to attack his enemies.

Features - Hinged hatch at the front to load The Wizard. Lightning detail for fingers. Joints at shoulders, knees, hips, ankles, toes and and fingers.

Comparison to previous design - Unlike the earlier "Wise man" this design is taller, has more detail (more bricks) and is deliberately more difficult to construct as this would essentially be the figure for older builders. There are no weapons in keeping with his status as a wizard, though it would not be difficult to redesign the parts to create a hammer. 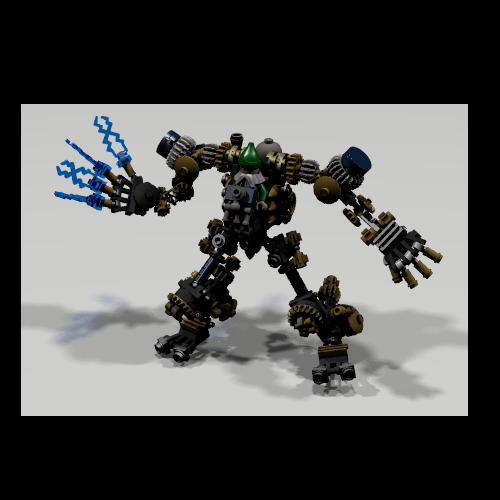