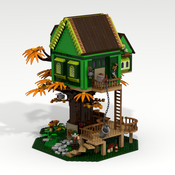 Citizens of the Far Ring do not count time by the ancient calendar of the Consortium. Instead, they measure time from the date of the last Consortium shipment, now 150 years past—the last time anyone has seen an official, or anyone for that matter, from the Inner Rings. It is also the last time that those lucky enough to have a fortune in the old trade coin were able to escape to someplace better. The ways are shut.

Only the stubborn or unfortunate were left behind in what we call the Far Ring, the last ring of habitable space before the radiation veil and what lies beyond.  After a long period of lawlessness, scarcity forced those left behind to band together for support, and the Scrap Factions were formed. The Factions rule by might--but by mutual agreement, the old customs are respected and peace is maintained. But every year, the people grow increasing embittered by the harsh realities of life at the edge of existence.

However, those with age know that the greater enemy is not the scarcity of resources, or the rivalry of another Faction—it is what lies beyond the veil. The memory of the last large raid has faded, but the threat is ever-present, and unlucky ships still go missing if they tread to close to the void. No. The true threat lies beyond the veil, beyond where the Faction ships can go, where the Others are thriving…

Ohmra of the Purple Shield Faction and her scout ship, Veil Weaver. Veil Weaver is the fastest ship in the Far Ring, pieced together from the best technology left behind by the Consortium...and other parts. What Veil Weaver lacks in weapons is more than made up for with speed and cloaking abilities! When quickness and discretion is necessary, Ohmra is the best captain for the job!

This set, “Cyberpunk Spaceship”, is less than 500 pieces in total. And I think it would not be so complicated that kids and adults alike could enjoy putting it together. I think the set has a good mix of detail and playability! Please enjoy!

If you like this project, please check out my others at the following link. And please check the UPDATES for renders: https://ideas.lego.com/profile/BuildFiend/projects. There is a good mix of projects for a wide variety of audiences. Check it out! Thanks, BuildFiend :)