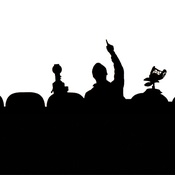 This is the Satellite of Love, as seen in the beloved television comedy series Mystery Science Theater 3000, otherwise known as MST3K.  For the first few seasons, the show centers around lead protagonist Joel Robinson, later he is replaced by Mike Nelson in the lead role.  The lead character is kept company by his robot friends Gypsy, Crow T. Robot, Tom Servo, and Cambot.  Crow and Tom Servo join Joel and Mike in the theater where they are forced to watch terrible movies, all the while subjecting viewers to fits of laughter as they ridicule the film with hilarious commentary.  The lead antagonists Dr. Clayton Forrester and TV's Frank regularly send these terrible movies in their quest for world domination and their experiment to determine how watching bad movies will affect a person's mind, while Pearl Forrester, the Observer, and Professor Bobo continue the tradition in the later seasons.  The witty and original show brought to light a new genre of comedy that impacted and inspired thousands of people, and brought back otherwise lifeless movies and made them worth watching with hilarious commentary.  Now, years later the show is coming back with 14 brand new episodes planned to release in 2016.  As MST3K fans gear up for the reboot, why not watch it with the beloved cast of the original MST3K and the Satellite of Love - in Lego form!

The Lego Satellite of Love features:

If you’re wondering how they eat and breathe and other science facts, then repeat to yourself:  It’s a Lego set, you should really just relax.  So grab your Master’s coat and put on your Rowsdower mustache, because in the not too distant future (perhaps next Sunday A.D.?) this fantastic Lego set could be yours.  Push the support button Frank!

Please circulate this around the web as much as you can, encourage your friends to support it!

More Updates to come, be sure to check out the updates page!

Note:  This project is the culmination of work that began on July 15, 2014.  As the Lego Digital Designer inventory has expanded I have been allowed to fully replicate everything I think should be present in a MST3K Lego set.  When I finally came to upload my project I found another MST3K project had been uploaded only a couple weeks before.  It’s very interesting that a project popped up right before I was about to upload mine, but nonetheless I would hope supporters and fans of MST3K would see how hard I’ve worked to recreate a fully functional Satellite of Love that truly represents the Mystery Science Theater 3000 series.