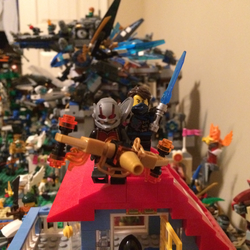 This project was inspired by the fact there is not a current medieval Lego theme. I am aware Nexo knights is a semi medieval theme ,but I and many are not satisfied with the theme taking the place of Castle and Kingdoms.

The small platforms on witch the figures are displayed are modular as demonstrated below.

The ice dragon was built over time using pieces from many mixels and a few added pieces from my collection, However, unlike most Lego ideas projects, it was not built for Lego ideas. At the time I built this project it  was purely to satisfy myself. I soon found Lego ideas and posted a project called the blade fighter. It timed out at about fifty supporters. I then realized I must find a less populated category. The fighter and this project were built before I found Lego ideas. That is how I built this little project.

The black knight has taken the king into The Frozen Caverns in a desperate attempt to escape the lion knights. Little does he know, the dreaded ice dragons dwell in these caverns and in his clumsiness he awakens the biggest drake of all! The knights must get past the dragon ,no matter how they do it. It is up to you to decide how they get the king back ,if at all!