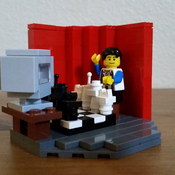 These fencers are ready to go for the gold!  Fencing is a highly strategic swordfighting sport.  You must outplay and outsmart your opponent to win.  I depicted this sport in Miniland scale, like the models on display at Legoland.  Each fencer has a foil (fencing sword) made out of an antenna piece.  One is clothed in a white uniform, and the other in black.  They both work with a coach clad in blue, practicing on a blue floor with white boundary lines.  I also made some flags to represent the fencers' possible countries which include USA, China and Taiwan (I also wanted to create the Japanese flag but I didn't have the right piece for the red dot).  The Olympic flag shows the fencing event.

I think this would make a great set because almost all countries participate in the Olympics.  I haven't seen many Miniland scale sets, so I think this model could be a pioneer to future sets.  Fencing is a very cool sport that is harder than it looks!

Please support and follow my model.  Your feedback is highly appreciated.  Thanks!