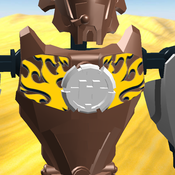 the front has two statues of athena dressed in gold robes. if posible, i am going to make a custom print for the robes. it also has a terrace and greek style pillars.

the back is open for playability, and you can see a garden and two micro figure statues. there also is a red carpet for the emperor to walk on.

the minifigs are the emperor and two hopilites. i also need chestplate prints for the hopilites and a male robe print for the emperor.


i hope that you will support this model so it can become one of the greats!