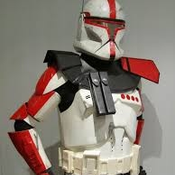 With this set, you can pit the Galactic Marines (2 included) against the Droid Army on the war-torn planet of Mygeeto. It's designed to be cheap (Estimated price $15 USD to $20 USD), so one can purchase multiple sets for a larger battle. The droid forces include a Droid Commander, a Droid Pilot, and one Infantry Battle Droid. The models include a Grey barrier/wall, a mini droid gunship (for the pilot), a small Republic Anti-Infantry turret, and a larger Republic Cannon.

1. The gun on the miniature turret is much like the Z-6 cannon used by the Clone Commander in Star Wars Battlefront II, and can be mounted on the shoulder of the Marines.

2. The Republic cannon can rotate and seats one trooper.

3. The Droid Gunship has seating for one droid.