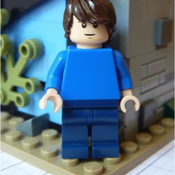 This is my third generation for my series of Hover Strikes (https://ideas.lego.com/projects/110606), which is called 3.0 Shadow Ghost.  This is the most agile of them all, designed for stealth in the dark of night.  Its dark blue and black color scheme help it to be unseen while on its missions.

This model features ball-joints for the connection between the wings and the body which allow the wings to change position as can be seen in the last two photos.  A new feature of this model is that it can carry a full size minifigure instead of a small person.  This also features retractable landing gear like the other models.

If you would be interested in buying this if it became a set, then please support!  I need as much support as I can get.

Thanks for checking out my idea.  I hope you like it.  Spread the word!