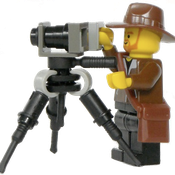 At first this design started as a tiny little micro fighter. It was originally red, but i decided to build it in this color because it reminded of a star wars mandalorian star fighter. This star fighter has 3 special features. The first feature is the wing section in the back, the wing fold up when not in combat and then can fold back out. The second feature are 2 rear cannons. when an enemy is on this fighters tail, he can shoot at them from the back. And the third and final is the cockpit. If the ship was to get hit and damaged while in a planets atmosphere, the cockpit can detach from the ship. I'm created this design because I noticed some people like this type of category.