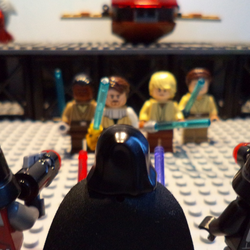 No matter where you go in the universe, there are always pirates. And no matter which pirates you find,

When I designed the vehicles, one thing was on my mind: color scheme. I decided to base the vehicles in the scene off of Blacktron and Spyrius, the two most notorious villain organizations in space. Blacktron has had two color schemes throughout its time: black and transparent yellow, and black and transparent yellow-green. For this model, I chose the latter. The theme from which it is derived from, Blacktron II/III, is much more iconic and well known than its predecessor.

Enough with colors. Let's move on to the models themselves.

The first and most primary vehicle is the fighter. It has room in the cockpit for one minifigure, and features an opening hatch on top and an extra back hatch. This hatch in the back should also be replaced by a windshield of a different color. On the forefront of the fighter are two double-barrel guns.

The Spyrius fighter is accompanied by a watchtower. A robot works the tower. It has three domed windshields around the top. I believe these windshields should be replaced by transparent blue ones, to give accuracy to the theme.

The Blacktron pirate rides in a weaponized, multi-function walker/pod. The legs of the walker can flip up to become wings. Clipped to the back is a Gatling-style laser gun and a flick-fire missile. Again, the windshield should be replaced by one that gives more accuracy to the theme.

Lastly, we have a War-of-the-Worlds-esque laser bot. The laser/eye sits under the top of the bot and swivels in every direction. It also has a spring-loaded missile underneath one of its legs.