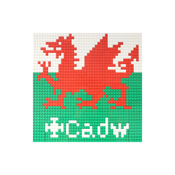 With more than 600, Wales is the castle capital of the world and this set allows you to recreate the country’s largest – Caerphilly Castle and hold it in the palm of your hand.

The design features Welsh flags and the series of moats and leaning tower that make Caerphilly so iconic. Thanks to Oliver Cromwell, the tower actually out-leans Pisa’s!

The castle was Britain’s first concentric castle and once played host to Henry VIII. The original took three years to build, between 1268 and 1271, but we hope you might finish this one a little quicker.

Caerphilly Castle is also a great backdrop for TV and film and has had starring roles in BBC’s Doctor Who and Merlin.