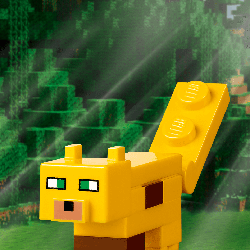 One of my favorite Lego minifigs from the Minifigures series is the paintball player. So I decided to build a paintball field. It's made up of nine seperate parts including an entrance way, four different types of barricades, three trees, and a pond and has 590 pieces.

There are five minifigs: two blue team players and two red team players and one referee who is also in charge of the field. Theres also a frog at the pond just so you know. Each team has a flag and the red team also has a quadbike. There's also a big banner at the entrance that says paintball.