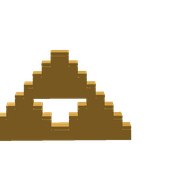 By Clarinet3545
2 comments
Remember this old and classic game? This game is still one of my favorite games to play! So I wanted to incorporate this classic game into Lego. This is the Galaga Ship incorporated into Lego form.

If you are not familiar with Galaga: (from Wikipedia) Galaga is a arcade game developed and published by Namco in Japan and published by Midway in North America in 1981. It is the sequel to Galaxian, released in 1979. The gameplay of Galaga puts the player in control of a space ship which is situated at the bottom of the screen. At the beginning of each stage, the area is empty, but over time, enemy aliens will arrive in formation, and once all of the enemies arrive on screen, they will come down at the player's ship in formations of one or more and may either shoot it or collide with it. During the entire stage, the player may fire upon the enemies, and once all enemies are vanquished, the player will proceed to the next stage.
Galaga has proven very successful. The arcade version of it has been ported to many consoles, and it has had several sequels, most recently Galaga Legions for the Xbox Live Arcade service.
When I reach 35 supporters I will release some of the aliens for the Galaga Ship to shoot down in a different set.