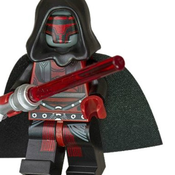 The First Order Transporter Microfighter is based on the Transporter made by the Lego set and I made it in microfighter form. It can shoot when you push a lever at the back of the Transporter. I built it because I would like to be a Lego designer and so I would like to post my first set on Lego ideas. I've loved Lego since I was four and so I built this because I know that Microfighters are really popular and many people like them. It comes with the Captain Phasma minifigure and is a great build. I hope you like my idea and support and follow me. Good luck building.