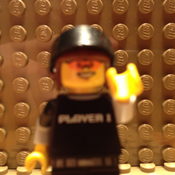 This is a Space Pirate ship. It has no relation to Metroid, if that's what you thought when you first saw this. It's just a micro ship that can be played with. I might make a larger scale ship if this one doesn't get enough supporters.