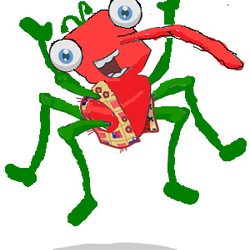 Bin Weevils is a 3D online virtual world, Where you can play games, meet with friends, adopt a Bin Pet and loads more! Bin Weevils started in 2003, with a cartoon in between shows on Nickeloden. Nickelodeon then teamed up with Prism Entertainment to create the original 2D version of the game. Prism then left Bin Weevils, leaving only Nick to create it, in 2007. In 2010 Bin Weevils became independent. Now, Bin Weevils are creating '55 Pixels ltd' to house Bin Weevils, and their new mobile game, Weevil World, as their parent company.

In 2011/12, Bin Weevils expanded into Toys and Books. Bin Bots Toys were very popular, but unfortunately, the rest of the products weren't and, from what we know, are discontinued.

While making this on Lego digital designer, I found that I cannot find any red or grey heads with faces, so they don't have any facial features. If this is made, LEGO may be able to print Tink and Clott's faces on them. Also, It look a while to work out a way for 4 legs, and I think I did quite well to think of it.

Here is Flum's Fountain in game:

The Model depicts Tink and Clott at Flum's fountain. I chose Flum's Fountain is it is the main hangout area on Bin Weevils. If this one doesn't work very well, I may produce a LEGO Ink's Orange Peel

All you need to do is click support, and fill in the form. Once 10,000 people do that, LEGO will contact Bin Weevils to get the licence. Without YOU LEGO Bin Weevils will not happen.

We know that Bin Weevil Team Members Drewbian, Unicron7022 and Tombalol are very big LEGO Fans, so they are supporting this project!