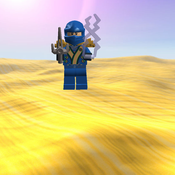 This project is a tunnel drilling vehicle which is used for tunneling underground. It features an articulated conical drill in front that can be switched with the scoop on back. The scoop is used for clearing away the debris left behind by the drill from the path of the machine. It has tracks instead of wheels for easier movement over rough terrain. The set includes a minifigure which can fit in the cab and six boulders with colored crystals inside. This set is reminiscent of the previous Power Miners line of Lego sets which gave me the idea for this project. I also think that this will appeal to Lego City fans as it looks like something from that line. Thanks, please support and tell your friends to do the same!