Bionicle: The Return - The Unknown

By Xendor
6 comments
It has been ten thousand years since Makuta Teridax was finally defeated, and Matoran and Agori, Toa and Glatorian, have lived in semi-harmony with each other. They have combined their technology to improve their lifestyle, and the Matoran have discovered how to reverse the mutations of the Vorox. Finally, Spherus Magna is almost entirely peaceful. All that was left was an island-continent with every Rahi the Makuta created. Many of the heroes of old have charged down, their mental energy dissipating, shutting them down. But as old heroes die, new guardians arise.

However, danger is not over. High among the stars, floating towards the Magna planetary system, a mysterious object glides past comets, asteroids and planets. Inside of this object is a large chamber that contains a strange creature. Its design structure are similar to the creations of the Great Beings. But its path has been much darker. As we go on, let's look into the memories of the Unknown. 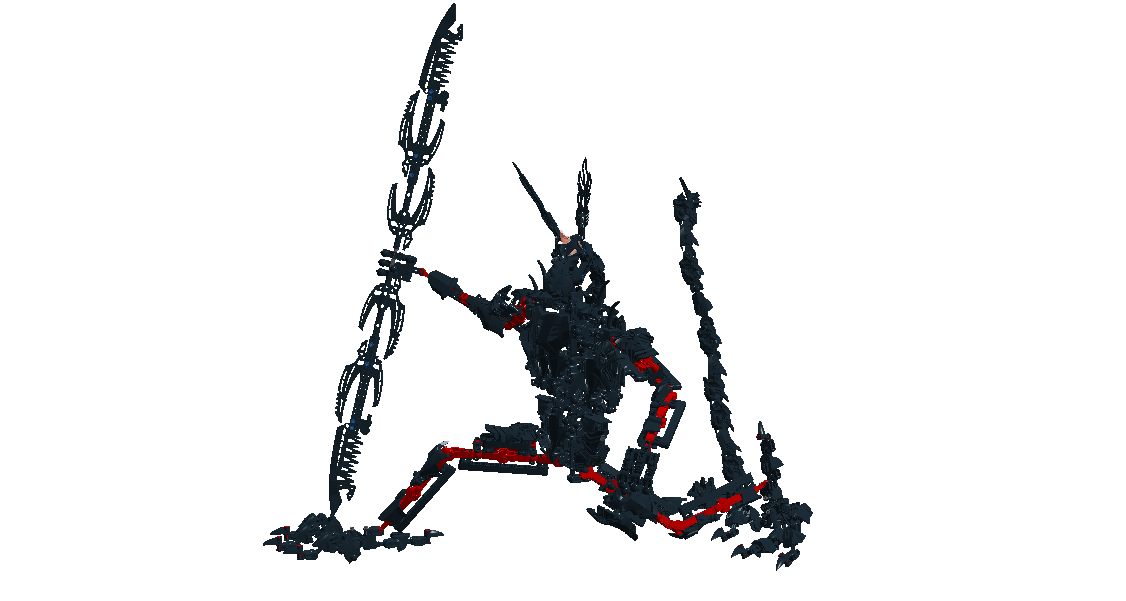 There was a few among the Great Beings who saw their machines as more than a walking piece of metal. They saw the behavior of a living being within these things, similar to the Great Beings. They began teaching these Orbalans to think for themselves, to be a single person. These teachings flowed, as one Orbalan talked with the next. The Great Beings of the Council thought little of this, thinking that it would just improve their efficiency. 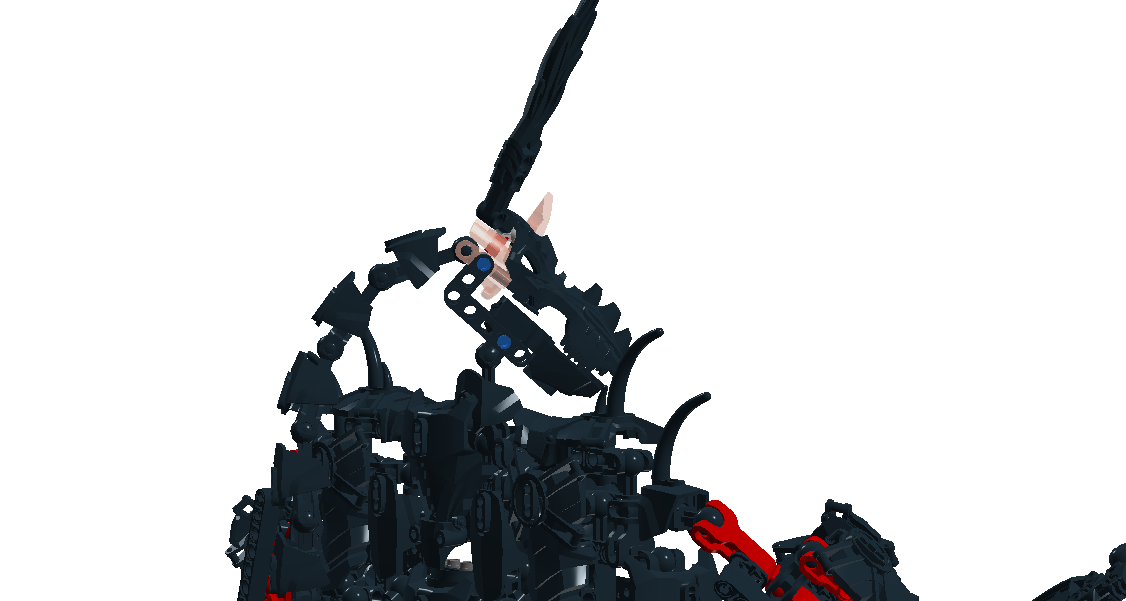 Although the Orbalans did become more efficient, they also became self-aware of their treatment. Some began questioning their reason, others just retaliated. But the real war didn't start till a Great Being destroyed an Orbalan for dropping an antique flower vase. When news of this spread, the Orbalans began rallying, resisting the Great Beings' police. As more Orbalans joined forces, their army began to grow at an increasing rate. However, this retaliation made many Great Beings recognize the Orbalans as "living" machines. They left their own government, and stood alongside the Orbalans. However, those who were power hungry stood their ground... and fell.

After the war was over, the Orbalans and Great Beings formed an agreement: After a hundred years rebuilding and restoring the beauty of Orbala, the Great Beings would leave Orbala to a new home. With their advanced technology, it took only ten years to discover Spherus Magna. After a hundred years were up, the remaining Great Beings boarded several moon-sized space vehicles, called Red Stars (similar to the Red Star, but much smaller). They then departed to Spherus Magna, leaving Orbala in peace. 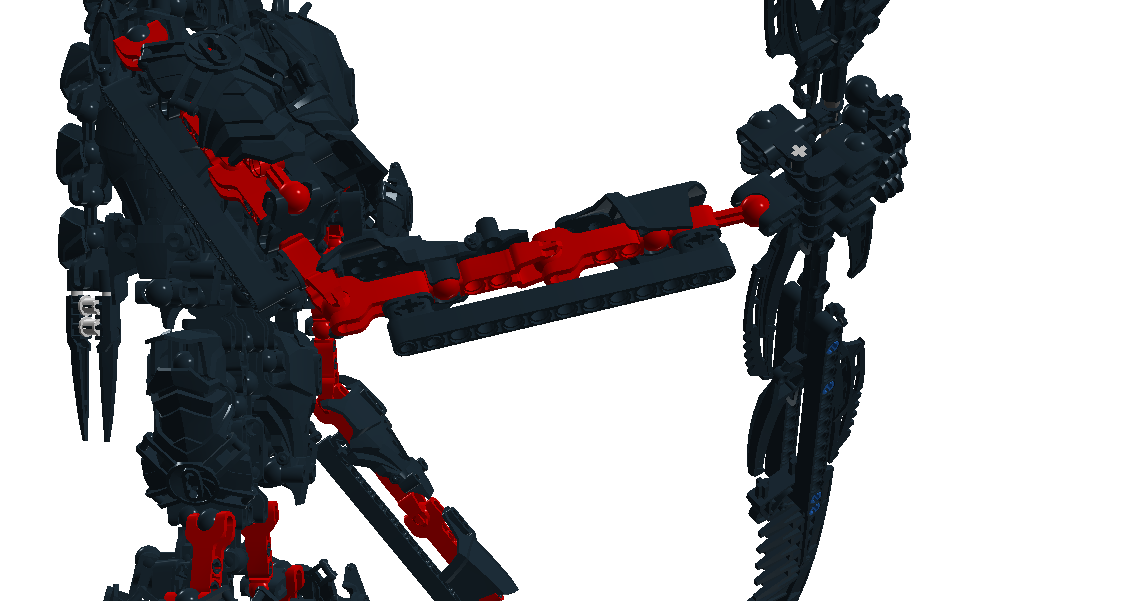 (Here is an image, made to show how the forearm was made)

5 hundred-thousand years after the Great Beings left to Spherus Magna, Orbala is a near desolated planet from a nuclear war that nearly destroyed all life, biological and mechanical. The only survivor was a lone female titan. After the war, during the plague, her father took her mentality and installed it into a new body. As his last command, he told her not to forget the beauty of Orbala. After he died, she spent her time trying to find a way to stop the deaths caused by the plague, using her own metallic armor to attempt to make a new armor that would make others immune to the affects, like her. But she never succeeded. With her lack of knowledge in chemistry, and all detailed info destroyed by the plague, she watched as the last fellow Orbalan died in her arms. After that, she spent most of her time trying to restore her home town. As she was rebuilding her town, she remembered the days when she worked at the garage shop, repairing any vehicle they brought to her, from bike to rocket.

Now, 10 thousand years after the war, she has taken her mechanical skills and built a space ship to take her to Spherus Magna. Over time, she has developed a sincere hatred to the Great Beings, blaming them for what happened to her world. She has forgotten who she is, and everything about her father. All she remembers is the beauty of Orbala, and the ones who left them to rust. Now, she is going after them, to destroy them, and whatever else is there. 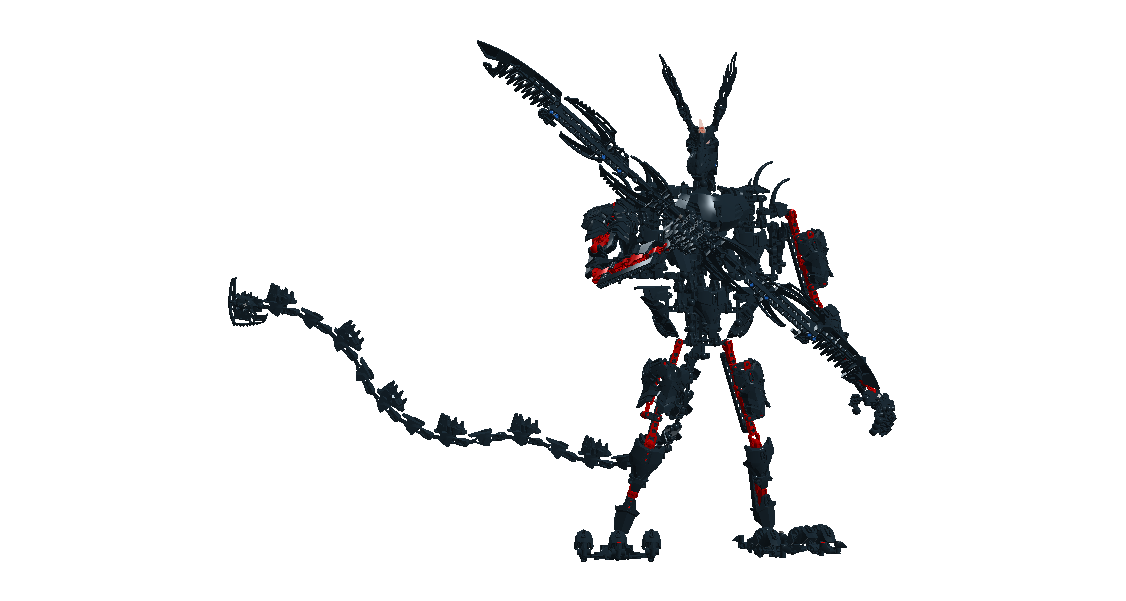 As you may have noticed, this lady is HUGE! If I were to make a guess, probably over 2 1/4 feet tall in real life. Her father equipped her with power to control everything to the atom, allowing her to change the texture and makeup of any object and substance, and with dragon armor, to intimidate any trespassers. Her staff was made out of an unusual "gas" that, when heated, can be shaped. Then, when cooled, it stays in that form, despite passing through a solid object. As it passes "through" any electrical system (with the exception of her, due to her protective armor), it shuts it down, and forms a layer of unbreakable "skin," basically turning any victim into a statue.

This set contains 397 pieces, more pieces than Toa Mata Nui from 2009 with 366 pieces. The Hero Factory figure with the most pieces is the Witch Doctor with 331 pieces. Building this set has made me realize why LEGO hasn't sold any sets of such extent since then, due to the lack of a proper technic to build a body huge enough. Even the Unknown, despite looking so tough, lacks the stability in her torso to match with Bionicle. But you work with what you got.

Below is the first chapter of the story. For each Bionicle set I produce for this timeline, I will add another story. Now read on, as we enter a familiar, yet new universe.

It has been years since Makuta Teridax was defeated by Mata Nui. Ten thousand, to be exact. And many of the old heroes have died off. However, the memory of what they did lives on with the few remaining from that time, and in the scrolls written by the Chroniclers of that time. The Toa, Matoran, Glatorian, and Agori have gathered together, sharing their technology, and they have rebuilt much of what Teridax destroyed.

Here, in the village of Greater Mata, life is as it pretty much was like before, but not as trying and difficult. What’s left of the aggressive Rahi has been pushed out past the dessert, Bara Magna. There has been no sign of some of the Rahi, and many Matoran went missing during the Final Battle. But they have been remembered, as a stone pillar was erected for every life that was lost.

But the greatest sight in Greater Mata is the Temple of Golden Armor, built in honor of Mata Nui. Made of Iron, it stand fifty yards high, with a square base of 100 yard wide. Inside, in the main chamber. is the Ignika, the Mask of Life, placed on a statue of Mata Nui’s Toa form. On the wall to the left is the Golden Armor the Ignika gave to Toa Tahu, while on the right is Mata Nui’s sword.

Toa Bomonga has grown old in time, and as the Toa and Glatorian are dying off, new defenders must be found. Here, in the Temple of Golden Armor, he speaks to one of his pupils.

Clarrik: Thank you, teacher. I am glad you’re pleased.

Bomonga: Pleased, but not proud.

Clarrik: What do you mean?

Bomonga: You have excelled with every weapon we’ve handed you. You seek to help people, and do not tolerate crime. There you do well. But you are aggressive. You jump in swords out without a second thought.

Clarrik: When have I done that?

Bomonga: First of all, never interrupt me.

Bomonga: Second, you remember that incident in the jet factory in Taka?

Clarrik: He had a knife.

Bomonga: A table knife. A dull knife. Otherwise they both were unarmed.

Bomonga leaned on his staff.

Bomonga: If you want to earn the title Toa, you must consider the life of all beings, good and evil alike. Think over whether or not you have to harm the target, or even if they are a threat.

Clarrik: I didn’t kill him.

Bomonga: But you did sever his forearm. Now go. And think upon what I said. If I hear that you harmed another person needlessly, you’re out of the class.

Female: Well, that went better than I expected.

Bomonga turned around to see Gaaki standing next to the tablet below the Golden Armor.

Gaaki: Time is something we have.

Bomonga looked up at the Ignika.

Bomonga: Do we really have the time? I can’t shake the feeling that something is coming.

Gaaki: You’re not the only one. Vakama and Nokama have the same feeling.

Bomonga: Do they know what it…

Suddenly, a huge explosion shattered the windows around the place, and shook the entire
temple. Grabbing their shields, Bomonga and Gaaki ran out of the Temple. There, they met one of Kiina’s pupils.

Pupil: There was a giant meteor that entered our atmosphere heading west. It must’ve broke the sound barrier while flying over our head.

Bomonga and Gaaki ran to the west side of the Temple, watching as the meteor moved towards the sun.

Gaaki: Think that is it?

Bomonga watched as the meteor flew on. It was spouting green and red flames, with no trace of smoke. And as he stared at it, he felt as if a hand had grabbed his.

Bomonga: There’s only one way to find out.

Thousands of light-years away, a planet has been decimated by nuclear war. Whole villages are destroyed, and there is almost no trace of life.

Almost. In one of these decimated towns lives a single soul, who has worked on trying to rebuild its home for years. Entirely alone, it has been around since the nuclear war began. After the war, after trying fruitlessly to save its race, the mind has been torn. She has been alone so long, she has forgotten everything, except two things: the former beauty of her world, and who she blames.

For years, she blamed herself for the death of her race. Then she blamed her father, for not saving others as well. But eventually, her blame landed on a people that had created them. That hadn’t been there for over a million years.

Or was it two million? She never could keep track all she could think of was their name, and where they went. The Great Beings. Spherus Magna.

For ten years, she has been working on a vehicle to take her after them. Now, it is complete.

As she stares at the rocket from the shadows, she tries to think of her life before all this. Before the war. But she can’t. It was gone.

That angered her. She stood up, and walked out of the shadows, a good thirty feet tall, lacking almost all traces of feminism. Her feet left imprints in the ground, and her prized playground collapsed. She paused, trying to remember when she built it. But then she moved on.

As she climbed into her stasis chamber, she thought of the war, the lives she couldn’t save, of the time she spent trying to rebuild it all. Now, that all ends.

She stares up into the sky, to the stars beyond. Then she stared at one dark patch, in the direction of Spherus Magna.

Unknown: I’m coming for you.

Then she pressed the launch button. As the engines ignited, the stasis chamber activated, slowly freezing her in a thick layer of ice.

She wouldn’t wake up for another two thousand years.