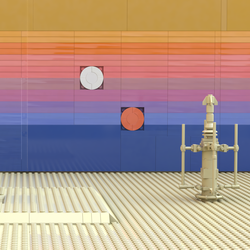 Hey! Have I got a pitch for you. This is the Lego Salesman. He has posable arms, elbows, legs, mouth, and head. Not to mention his wrist rests on a ball joint and his fingers/thumb are movable too. He has a clipboard to get you to sign up for one of his rewards programs. He also carries his smart phone in his back pocket in case any customers call with a question for him.

I built this action figure-type lego model because my little brother likes action figures such as the Bruder garbage men or firefighters. When I created this model, I thought it was very interesting how I could use him in my Lego animations by moving his mouth and limbs to look like he is alive.

This would make a great set for LEGO fans because they can experiment with building techniques that make a posable figure possible. Children and teens can pose him in different ways and can change his expression on his face by moving his mouth too. He is an awesome build for beginners and intermediate builders because it will give them insight on how to build outside of the minifigure scale and build with bigger figures to add more detail to them.