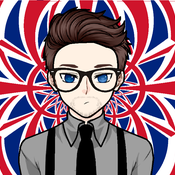 Britain is home to hundreds of 'black cab' styled taxis, and they've really become a part of the UK culture. Whilst being modernised overtime, the core Taxi has remained mainly untouched. This set is similar to that of many smaller LEGO City sets that include a car; they usually have a car, a minifigure and a slight bit of scenery.

The Taxi takes to form of a modern black cab, stripped of any advertisements from the sides of the vehicle.

Included are two minifigures, one intended for role as driver and other as passenger. Although it is intended that their roles are as above, they're not specific to this and are interchangeable.

The pavement section is comprised of a curb, a lamppost, some fencing and a sign possibly pertaining to a street name. Included are two London-coloured bins. Blue for recycling, and Green for organic waste (to my knowledge). The waste included in the Blue bin is a printed pizza box.