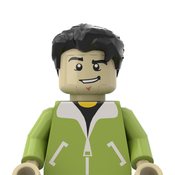 Metallica is an American heavy metal band formed in 1981 Los Angeles, by vocalist/guitarist James Hetfield and drummer Lars Ulrich. With a career spanning nearly 40 years, the band has won 9 Grammys, is inducted in the Rock and Roll Hall of Fame, and has become arguably the greatest metal band in history. With millions of fans from around the world, the band is still touring annually, having been the only artist ever to play on all seven continents (including Antarctica). To celebrate this band's great achievements, and their coming 40th anniversary in 2021, I present to you this 1282 piece replica of the live concert stage from the band's ongoing global WorldWired Tour.
DESCRIPTION
As previously mentioned, this model is based on the touring stage assembled, taken apart and reassembled in each of the cities the band visited over the course of the tour. To begin, I've included the big "M" and "A" on either side of the stage (which I must admit were quite fiddly to pull off). The set includes the following band members: frontman, vocalist and rhythm guitarist James Hetfield, lead guitarist Kirk Hammett, bassist Robert Trujillo, and drummer Lars Ulrich. UPDATE: Along with the band's current lineup, the past bassists, legendary Cliff Burton, who was killed in a bus crash back in 1986, and his succeeder Jason Newsted, are also included. Each musician's instrument is present, including Lars' purple Tama drum kit, which is removable from the stage. There are 3 microphone stands, one of which has a rack holding the acoustic guitar that James plays during hit songs such as "Fade To Black" and "The Unforgiven."
Moving on to the back of the model, there are 2 removable guitar stands with the band's backup instruments: 2 electric guitars, a bass, and an acoustic guitar. Also in the back is an anonymous sound technician at an audio station. Aside from the controls, there is a small TV screen that might serve as a preview monitor of the video feed being projected live on the stage screens.
UPDATE: The model also includes a custom band tour bus. It's worth noting that this isn't based on any particular vehicle in the Metallica's possession. In sleek black, the vehicle is decorated with several of the band's logos and a side advertisement that reads: "Metallica On Tour!" The bus features a full interior (also custom) with 4 removable seats, a removable bed, and a refrigerator in the back with some beer if you may. The bus features another custom element: a 1x2 printed tile of a California license plate bearing the word "METALLICA," which I'm sure is one for the collectors.
Lastly, this model has included an additional component: a vinyl records and CD store/merch stand. The stand displays all 10 of the band's studio albums, their vinyl sleeves, and CD cases. On the table is a record player with a record in place. There is also a small silver round tile, my best attempt at depicting a CD. Behind the counter stands a store seller/manager. There is also a cameraman included.
FEATURES
- A replica of the live stage from the WorldWired Tour
- 9 Minifigures: James Hetfield, Kirk Hammett, Robert Trujillo, Lars Ulrich, Cliff Burton, Jason Newsted, a cameraman, an audio technician, and a store clerk
- 8 guitars + a pair of drumsticks
- A removable drum kit
- 2 removable guitar stands
- A small shop/merch stand
- All 10 Metallica studio albums (Kill 'Em All, Ride The Lightning, Master Of Puppets, ...And Justice For All, Metallica (the Black Album), Load, Reload, St. Anger, Death Magnetic, Hardwired... To Self-Destruct)
- A band tour bus with a full interior
OTHER INFO
- Part count: 1282
- Total design time: 14 days
- Build time: 22 hours
- Render time: 35 hours
- Designed using: BrickLink Studio
ADDITIONAL RESOURCES
There is a 3 part video series on my YouTube channel showing the full design process in BL Studio, time lapsed.
Part 1
Part 2
Part 3
Project trailer
With that I sincerely hope that you like my project. Please, consider supporting if you love Metallica, or simply love my design. It would be awesome for both the Lego community and the metal community if this were to be approved as an official set, even on shelves for enthusiasts! Be sure to check out the videos above, share them with your friends, and stay tuned for updates. Thanks for checking this out.
"There is something powerful in Metallica, a will, a drive."
- James Hetfield
DISCLAIMER: I do not own any of Metallica's logos, cover art, or intellectual property. All copyright goes to their rightful owners.