If you have seen the movie The Perfect Storm (or read the book on which it was based), then you should be well acquainted with the history of the Andrea Gail. If not, I'll give you a little background:

The Andrea Gail was a longline fishing vessel built in 1979. She was homeported in Marblehead, Massachusetts, but usually sailed from Gloucester. On or around October 28, 1991, the Andrea Gail was caught in one of the worst storms to ever hit the North Atlantic, the so-called "Perfect Storm" of 1991. The Andrea Gail radioed her last position at around 6:00 PM on October 28, and then went silent.

Although the US and Canadian Coast Guards mounted a vigorous effort to rescue the crew of the Andrea Gail, searching almost 200,000 square nautical miles, the only items ever recovered were an EPIRB unit (a rescue beacon), several 55-gallon drums, and a few random pieces of flotsam.

The exact circumstances of the Andrea Gail's demise are not known, but it is assumed that the ice machine had failed and that the crew was racing home, trying to beat the storm so that their catch of almost 30 tons of swordfish wouldn't spoil. The prevailing theory is that the Andrea Gail was pitchpoled in waves that may have reached 100 feet in height.

Its legendary history aside, the Andrea Gail is a great example of a modern commercial longliner. She was 72 feet (22 meters) long with a beam of 20 feet (6 meters), displacing about 92 tons. Some of the notable features are the multiple cable reels (a longliner might pay out 40 to 50 miles of line in the process of fishing), the stowage for the buoys (used to support and locate the lines), and the towing anchor masts (from which the stabilizing anchors, or "birds", are hung). The deck is scattered with numerous 55-gallon drums -- the crew used any spare space they had to store provisions, since they might be out at sea for a month or more at a time.

The model that I have built is actually based more on the Andrea Gail's sister ship, the Lady Grace (which was used to play the role of the Andrea Gail in the movie). The Andrea Gail had a few minor differences, including a raised port bulwark, a plywood "doghouse" at the stern to protect the winch operator/baiter, and a small expansion to the pilot house on the starboard side. The features of the Lady Grace, however, are what most people associate with the Andrea Gail, so I decided to follow her design more closely.

The model is built at minifig scale (roughly 1:40) and is definitely a UCS-sized project, coming in at almost exactly 4,000 parts. It measures a little over 16 cm. wide by just under 60 cm. long. Although I tried to be somewhat economical during the build, I am certain that with some careful optimization, the part count could be reduced by several hundred. A more drastic optimization would involve removing the display stand and cutting the model off at the waterline -- that would save well over 1,000 pieces. Most of the parts are small and there are no particularly rare/unusual parts used (although there are some parts in new colors), so I would expect a favorable price/part ratio.

The main picture above shows a bow angle view of the entire ship sitting on the display stand with the anchor masts in the deployed position (i.e. with the "birds in the water"). Thanks to GlenBricker for providing a high-quality render used to create this picture. Note: There would be at least a small amount of rigging required to support the angled masts and to suspend the stabilizing anchors. I have shown where some of this rigging would go in this picture. The other pictures are shown without the rigging (or the anchors).

The picture below shows a stern/starboard angle (once again, rendered image courtesy of GlenBricker). 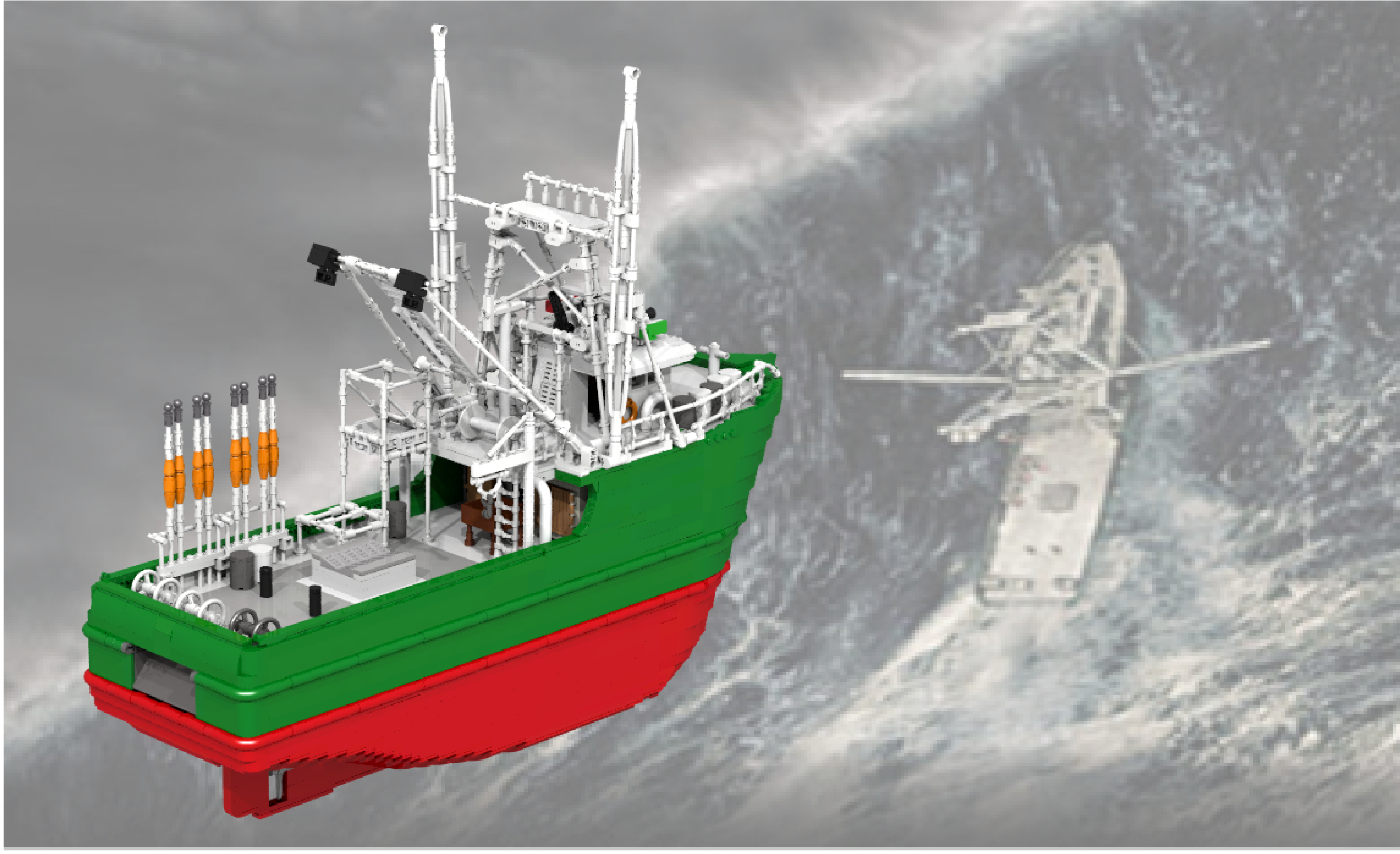 The next picture shows a close-up of the details of the pilot house and masts. 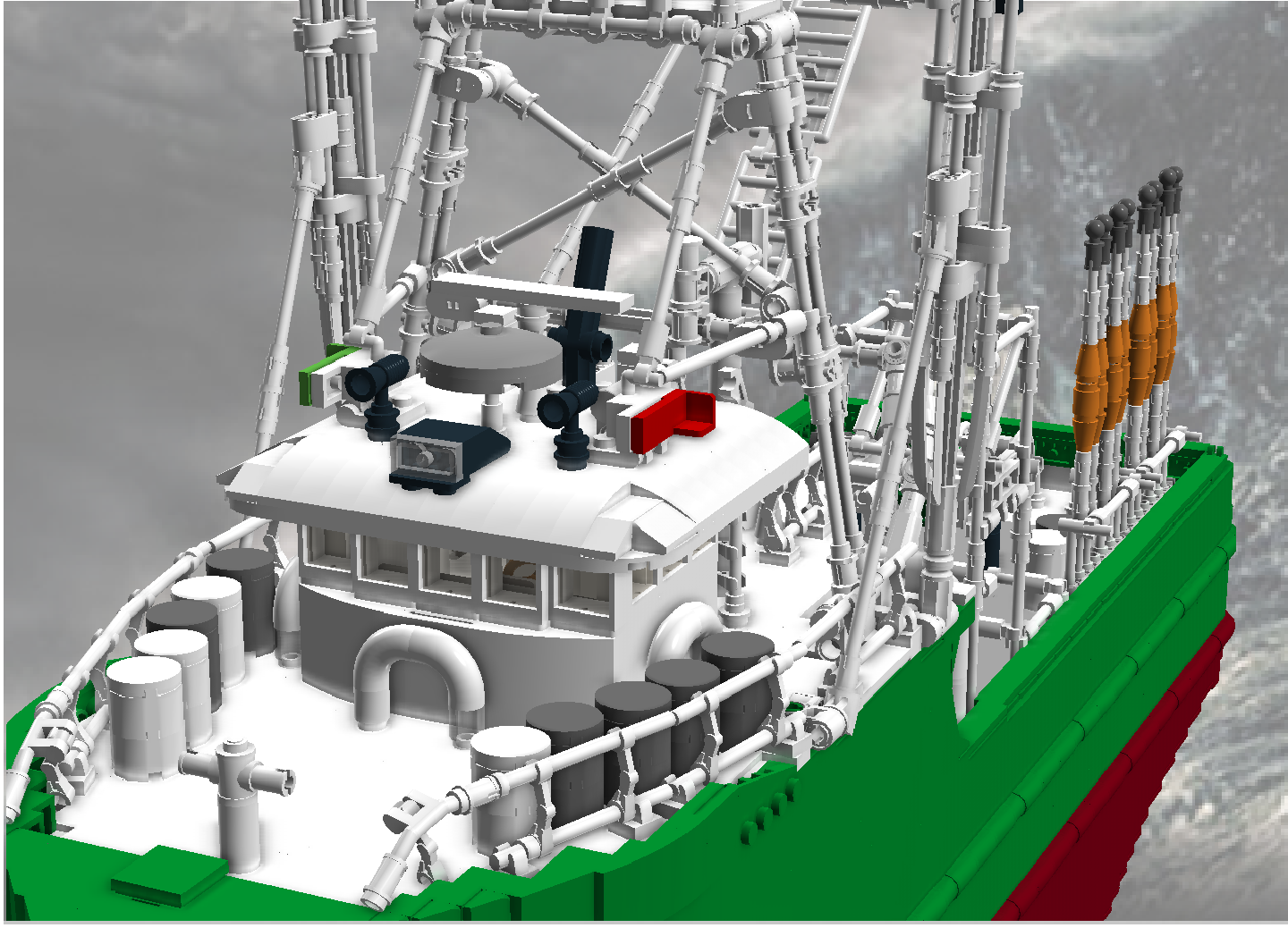 The next picture shows the details of the rear deck. 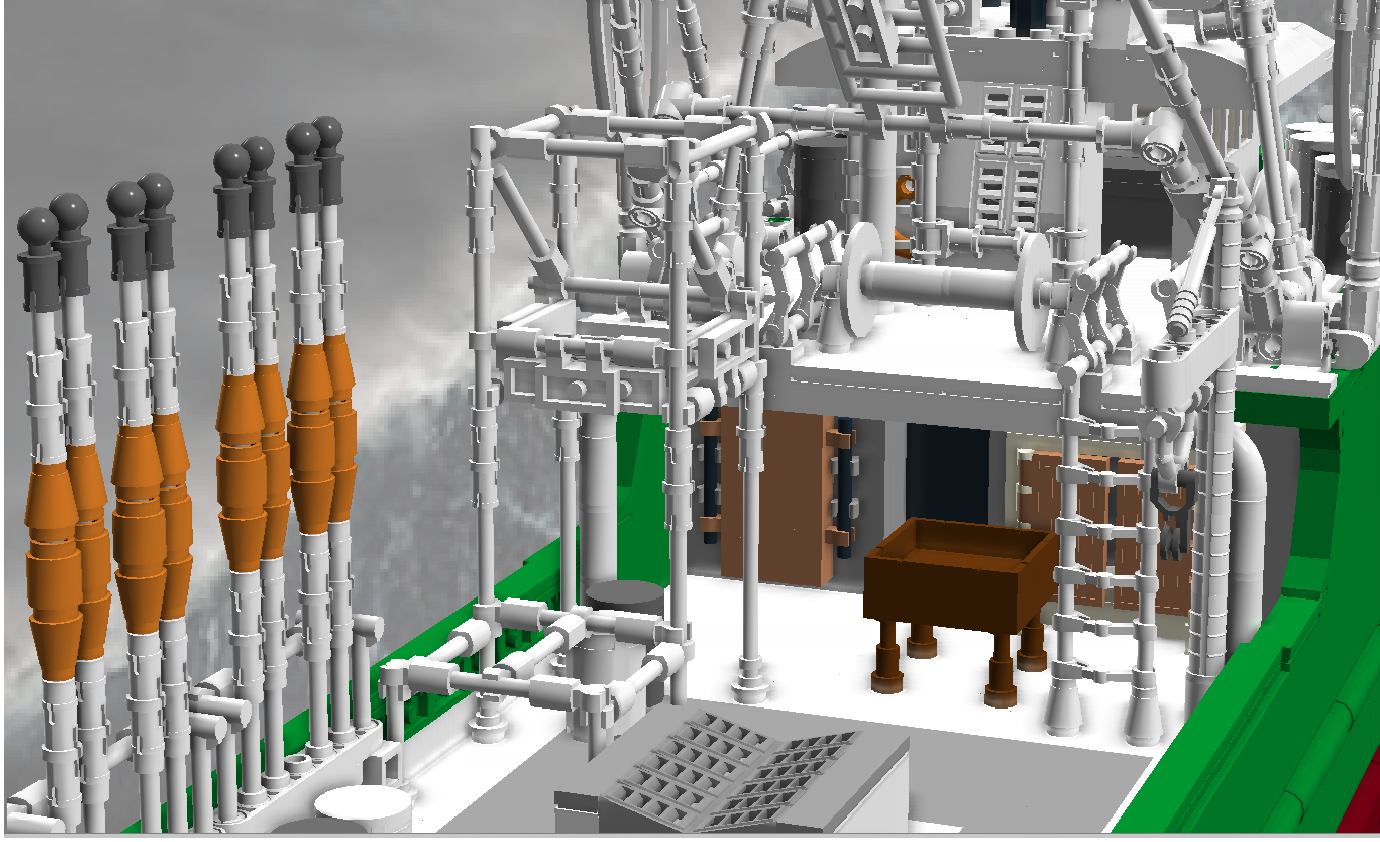 The final image shows the Andrea Gail from the bow/starboard side with the anchor masts up, and without the display stand. 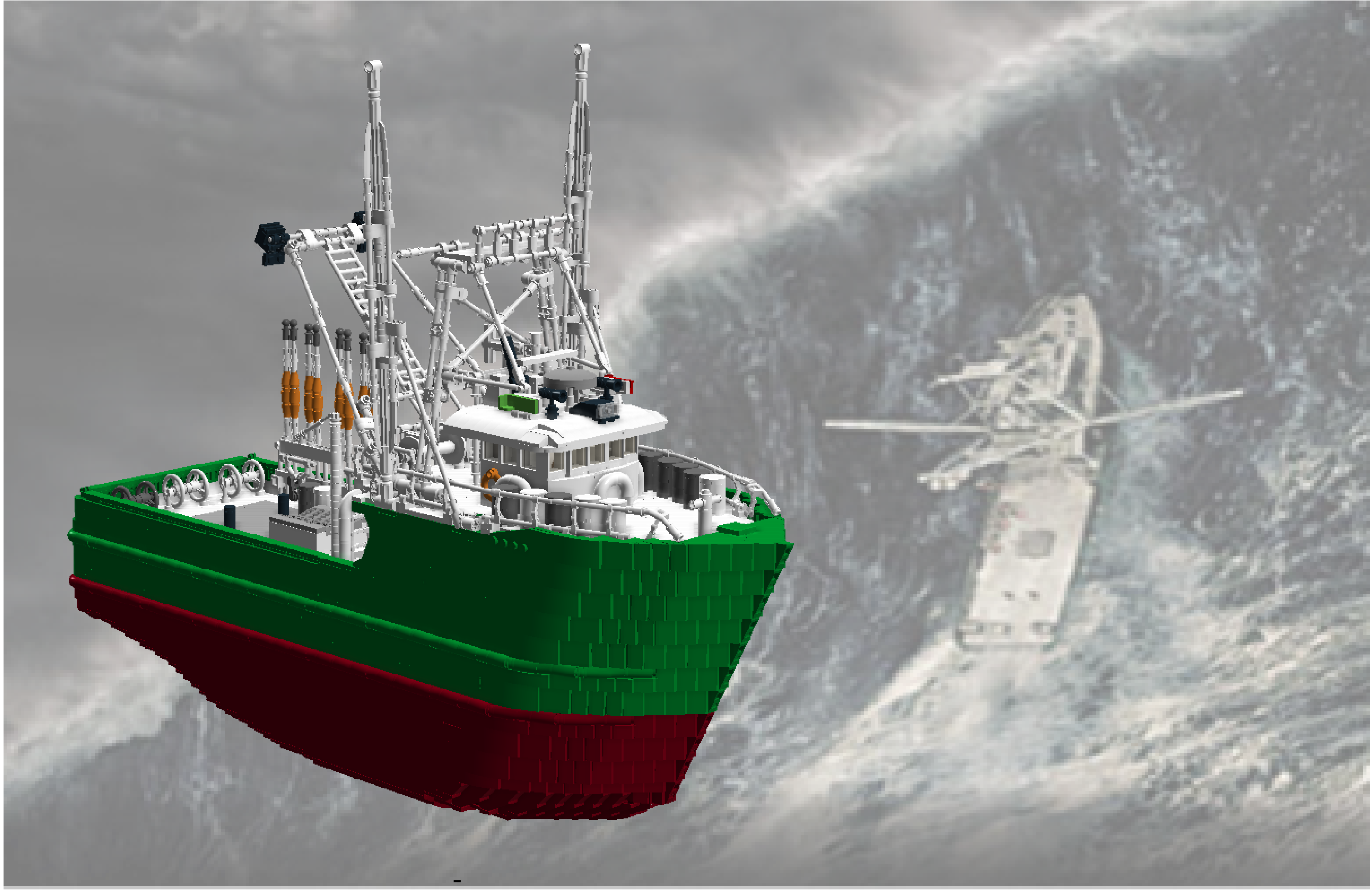 Higher resolution pictures are available on my Flickr page.

The aren't many LEGO sets that allow one to identify with an episode of modern history like this. The Andrea Gail would be a gem in any shipbuilder's collection.

If you like this project, you might also like some of my other projects, including:
UCS Double-Ended Ferry
New England Fishing Village
Busy Micro Seaport
Apollo-Soyuz Mission
Superheavy Multi-Axle Transport Rig