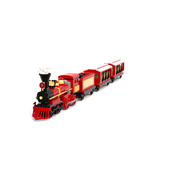 Each year, millions of people vist the Magic Kingdom at the Walt Disney World Resort in Florida. The first thing they see when they arrive is the Main Street Train Station.This set is meant capture the striking visual aspect and the wonder of the Train Station in Lego form.

The model fearures both the Walter E Disney model train and the Main Street Train Station. The train comes complete with built in motor and IR capability. The train station itself measures about 24 inches by 6 inches. The train features the engine, coal car, and two passanger cars measuring about 29 inches.

This set would be a great addition to anyone's train collection and the perfect set for any Disney fan, casual to fanatic.