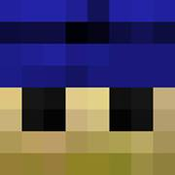 It's a board game. But what sets it apart from other board games? In this game, the players move at the same time! Plan your route while trying to predict your opponent's. Navigate around the rocks and avoid the ravenous Kraken. First one to sink the other's ship is the winner!

Both players share a common stash of die tiles that are added to the die as the game progresses. Players gain movement blocks by rolling the die. They use the movement blocks to plan their route. When both players are ready, they show their planned routes to each other and move their ships at the same time down their respective routes, trying to take each other out with cannons, or by ramming into each other.

If a player rolls the "gimmick" tile on the die, they get to move the Kraken around the board. The Kraken deals damage to any ship that gets too close to it. First ship to sink the other one claims victory.

And since Lego board games always come with alternate rules, I decided to add optional swivel guns (rotating cannons) to the game. You may replace one of your movement blocks with a cannon that can be fired in any direction.

I took inspiration from a lot of things when making this game. The die-building was taken from Lava Dragon, and the Kraken works similarly to the Minotaur from Minotaurus. Everything else is inspired by the MMO game Puzzle Pirates.

Do you want this? Support and spread the word!