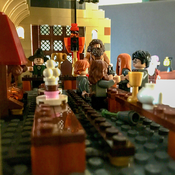 Hello, my first Lego Idea design is a reconstruction of the most beautiful building in Eindhoven, the Netherlands. The Evoluon!
The Evoluon is a discus-shaped building in the Dutch city of Eindhoven, designed by architects Louis Kalff and Leo de Bever and built between 1964 and 1966. The futuristic flying saucer-like dome measures 77 meter in diameter and is 30 meter high. The concrete of the dome is held in place by 169 kilometres of tension cable. The building is used for exhibitions and as a conference and event center.
It was designated a national monument in 2018.
The Evoluon was built as a showcase for technological progress, especially those aspects in which the originally Eindhoven company Philips was involved. The building was 'offered' to the city of Eindhoven in 1966 on the occasion of the 75th anniversary of Philips.
I chose this building because as a child I often went there to learn technology and to experiment with it. Unfortunately that is no longer possible because it is now a congress center. But there is hope, in 2025 the building will reopen as a museum with the theme "The future of our planet".
Besides the use of the building, it is also a very surprising building, especially on the inside. The dome is divided by 3 rings into various layers with an open view to the inside of the dome roof. Visitors can walk all around and view or experience the exhibits.
I see it as a huge challenge to design a "Minifig sized" building in addition to this small model.
This mini fig sized set will be interesting for a lot of Lego fans. The Space look of the building for all Space fans, the nice architecture for all architecture lovers and last but not least there is a lot of technique used in this building.
When the plans of reopening the building take place in 2025, these sets (Mini and Maxi) can be sold to visitors or business relations or who ever likes the building.