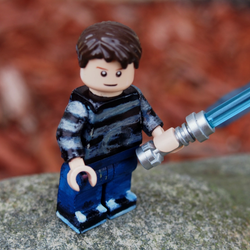 In the year 2086, scientists are building futuristic spaceships that will reach new planets and go where no one has gone before. This is the underground lab where you can build those ships and/or study the stars. This project includes the metal floor with rotating chair, two railings, one with rocket pieces and the other with a telescope and posable lamp, a table with a spring loaded shooter and more rocket pieces, a laser bullet plus the clip that holds it, stairs, a wrench, a sliding door with a code on the outside, and the Minifigure is a scientist.

I think that this would be a nice small little set to own because there are several possibilities. The first one is you could add to your Star Wars ships by taking the rocket pieces provided. The second is you [or most likely your children] can pretend that it's in space or on another planet to make it more exiting. The third is you can use it for an evil scientist's underground lair. The fourth is you can use it as an astronomy room by using the telescope. And the fifth, well I'll leave that up to your creativity. If you like this project then please support and tell others about it. Goodbye everyone and I'll see you soon!