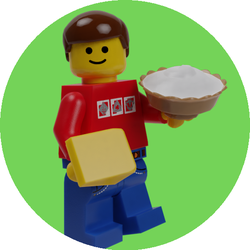 A year or two ago, I built a series of British style train cars. Little did I know that a year or two later I would be posting it to LEGO IDEAS! This set is 481 pieces. All of the train cars were built to be small and very compact. Every car is the same amount of length and width not including the steam train which is one stud longer. Inside the steam train is a set of controls on a 1x4 tile. That's all there is in it, surprisingly. The passenger car has some handle bar detail on each end. On the inside is a table with some food on it for the passengers. On the sides of the passenger car's inner walls are some 1x1 vertical holders for the passengers' suitcases. The gondola car has some fake logs in it. There is not much detail in there either. Now for the caboose. It has a light on each end. Inside is just a chair for the watchman to sit in. I hope you all like this! (11/17/2016)