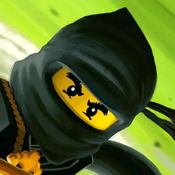 The build is Mystake's Tea Shop, as seen in Season 8 of Ninjago. I spent a few months designing all the aspects you see in the build. A dragon skeleton is hanging from the ceiling, which you can see in the show. There are hanging lanterns by the entrance without a dragon on it. Then the inside lanterns have a dragon on them like in the show. There is the painting of the Oni and the Dragon in the back room from when Mystake is telling Lloyd and Jay the tale. Even the teapot they were drinking from during the story is there. Boxes are placed in different corners according to the episode, shelves are where they are located around different scenes, and a small table with a mini tree on it as seen behind Kai and Jay while healing Lloyd. There are two teacups on the table, one small pink square pot (in the show, there was a plant in it), and some incense on the table. There are even the tassels hanging in the doorway to the back room. Multiple pots that contain plants are on the outside under the window.
There are two dumpsters with trash bags inside one and on the side of another. One dumpster is propped open just like in the show. You can see all the details in the episodes. There are two signs on one of the poles; you can't see what they really say, so I improvised. The octagon shape says "slow," and the banner says "tea shop." Both are in Ninjargon, the script used in the show. Behind the outer wall, there is a large tree with a lantern on it with a dragon printed on it. There is also a broom to sweep up the fallen leaves. Along with that, there is a sitting area with tea. The sign on the roof is the same sign on the roof in the TV show. With all these details, the total number of bricks is 3,000. I was really pushing the numbers here with this build.
I built this because Season 8 is one of my favorite seasons, and Mystake is such a cool character. So after creating a different Ninjago build, I searched for another building to remake, which turned out to be her tea shop. I like the challenge of making my builds as accurate as possible, and that's what I did here.
I feel like this would be an awesome set because imagine a LEGO Ideas Ninjago set. It's been my goal for a while, and I work hard for this to be a reality. I believe this would stand out among LEGO sets, and it certainly would be cool to see what LEGO could do with this.