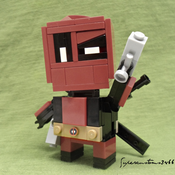 This is the Watchtower from the Justice League comics and shows. It is not the same version as the

one from Lego Batman 3, though. It is the Justice League's base and command center where they meet and

plan to defend earth. I think this would be a cool collector's set because it would come with all the Justice

League members and you would get them all with one set. It would have to have a display stand to position it

upright so it wouldn't just be laying on it's side.

The characters are-- (from left to right, back row first)-- Wonder Woman, Aquaman, Hawkman, Green

The set would be within the 50-100$ range and would be more of a collector's item. Hope you like it, and