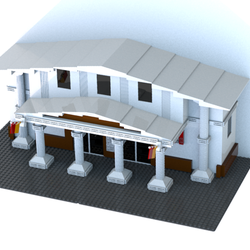 Gothia Towers are located in Gothenburg, Sweden just across the street from the amusement park Liseberg.

This is a small version of the three towers. However the swimming pool on Tower 2 is marked by a transparent light blue brick. The entrances as well as the roof terrace are found in the model.