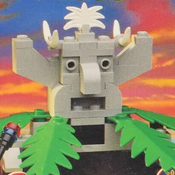 By Johnnycage06
62 comments
When I was child, my favorite Disney cartoon was Aladdin, which was released in 1992. I love every part of this amazing and lovely cartoon. I think Disney made the most wonderful story not only for every children but every people in this world, which amaze everybody still and forever.
I was inspired to create this childhood memory and move into a LEGO Ideas project, so since about 5 years, I started making and it was very hard to work out the details to look real, epecially the palace's cupola.
The bricks - in the front view of the palace - represent the streets of Agrabah city. Behind the "brick made" Agrabah, on the cliffs there is the Sultan's palace with its giant, gold cupolas (domes) and towers.
As you turn around the palace, you can find the locations of the cartoon, from the Agrabah market through the Sultan's Dungeon to the Cave of Wonders, where Aladdin met with the magic carpet and found the mystic lamp. (just like in the cartoon, this is the hidden door where Jafar - in hidden clothes - showed a rescue way to Aladdin to get out from the Dungeon to go to the Cave of Wonders to find the lamp) (Cave of Wonders)
The minifigures are the following (see on the picture): The set consists of 2997 bricks in total, has 9 minifigures (+1 with Aladdin's prince clothes), 3 animals (Iago - the red parrot, Rajah - the tiger and Abu - the little monkey) and 1 other character - the magic carpet, which are main characters of the cartoon as well. I believe that millions of youngers and elders will love this beautiful Disney LEGO Ideas set!
Merry Xmas to all of you and have a wonderful Happy New Year!