Lucky Luke and the Jolly Jumper 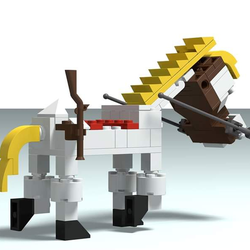 French Mocer
405
days left
26
it's Lucky luke with Jolly Jumper in brickheadz version.
I built it because I like the universe of Lucky luke and I think it would make a nice lego brickheadz set for Lucky luke fans.
Lucky Luke is a series of comic strip western Belgian comic strips created by the Belgian cartoonist Morris in the 1947 Almanac, a special edition of the Spirou newspaper published in 1946. Morris is helped, from the ninth story, by several writers,  the most famous of which is René Goscinny.
405
days left
26