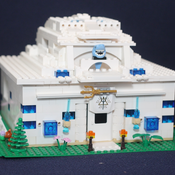 Hello Lego builders! So this is the Poseidon Cabin from the Percy Jackson series. The build is two stories with plants and animals along the sides. There are eight minifigures and two pegasi total. The minifigures are: Percy Jackson, Annabeth Chase, Nico Di Angelo, Luke Castellan, Clarisse LaRue, Grover Underwood, Tyson, and Chiron. Chiron has horse and a wheelchair form. Grover also has pants and goat legs and his Rasta cap. Tyson have two faces, one cyclops and one human. Each minifigure has two weapons and/or iconic items. Riptide also has a pen form. The two pegasi are Blackjack and and another nameless pegasus. The other pegasus is attached to the Poseidon Cabin chariot. Maned by Tyson and Percy, the chariot has many weapons and if Lego deems it unnecessary, it can be disregarded and not included in the set. The cabin itself has four bunks, two sets of armor, the fountain, many, many weapons, a workbench, trashcan, and table with a cabinet. Along the walls, there also lies the minotaur horn and the shield/watch Tyson made for Percy. There are also two chests, one geared toward Percy, the other geared toward Annabeth. In the attic, there are many odds and ends, as well as three chests. One is a miscellaneous chest, one a treasure chest, and one a clothing chest. The entire built rests on a green baseplate. Thanks you for viewing my Poseidon Cabin. If you do support, thanks so much!