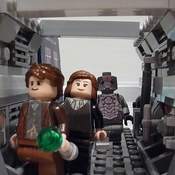 The set is a mixture of brown, light grey, and dark grey. There are two large fire pieces, to represent the bursting lava seen in the film. The set has plenty of features and areas for playing, or displaying the characters, which I will get to.

The set has a landing platform, where Darth Vader and Obi Wan start their Duel. There is a door that slides up leading to the interior of the Separatist base. And to get into that space better, the roof can be removed. There is a removable table in the interior, so Vader and Obi Wan have space to fight. To recreate the scene from the film where Vader and Obi Wan force-push themselves away from each other, there are catapults in the floor that allows you to recreate that scene. Other than that, I have added an area in the front with pillars, so there is more space for the battle to continue. Finally we have a walkway, leading to a smaller pillared battle area, which easily slides off/on when you push it.

I have gone through everything you need to know about this set. I hope you like it, and please support. Thank you.