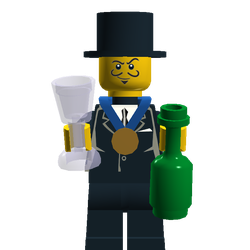 On a far distant world a lone human colony has come under attack by Alien raiders! But the human colonists are not afraid for they have an ace up their sleeve! The Thunderer M.B.T. is strong enough to repel any attack, it's gallant crew piloting it's multi-tracked chassis across the strange alien terrain in defense of the colony! Guns blazing under the starry sky the alien advance is halted, their troops scattering back to the deep reaches of interstellar space!

It has an opening detailed cockpit, opening side crew door, a small fast attack fighter/escape pod that mounts to the starboard side deck, two heavily armed turrets, and an opening port side turret platform concealing a detailed crew compartment.

This is the largest project I have uploaded so far but will not be the last! (maniacal laughter)