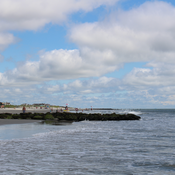 This is an alien that loves flowers, pretty things, and anything pink or red. She is an alien from outer space who came to Earth because on her planet there are no flowers or colors.  Her planets name is blanc which is white in French. So, when she came to Earth the first thing she did was see how colorful she could make herself and she found out there was no limit, so she decided to stay on earth.

I made this project because I love aliens and I decided to share my idea with everyone who loves a little color and fun. I started taking flowers and pink/ red bricks to make something, about a couple days later the idea came alive.