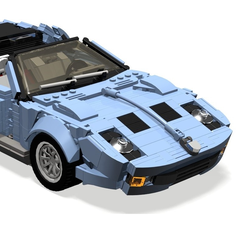 I'm happy to present you another car-themed project, this time it's a collaboration with my good pal of mine and a fellow LDD builder, Alice_2che. Well, long story short - being big Rocket League fans, we just couldn't leave this awesome game without a try to represent it in bricks :)

For those of you wondering what Rocket League actually is - this game is basically a crazy and incredibly addictive mixture of driving and football / hockey / basketball - instead of players the user has the armored battle-cars and a huge selection of ways to modify their look, making the process a huge fun lasting hours and hours.

And that's how these 6 tiny battle-cars were born, in classic teams of three - orange and blue. 2che's team of blue daredevils consists of Breakout, Merc and Venom - the ones (but far not the only) from classic game, my orange squad is presented with Marauder, Road Hog XL and X-Devil MKII - some of the add-on / crate cars. To make the things more realistic, each model is designed specially to include pull-back motors, so it can actually be played if built in real life! The things such as ball, arena parts and other things are in development.

As usual, every vote, share, comment, follower and other way of supporting is highly appreciated! Feel free to check out the other projects as well :) Thanks for paying attention and have awesome Christmas holidays!

Note: Rocket League and all its content, including the looks of battle-cars and other intellectual property belongs to Psyonix, Inc. The creators of this project aren't affilated with or connected to the company in any way, making this whole submission a pure fan work.