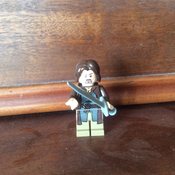 In the Hobbit Battle of the five armies Thorin,Balin,Dwalin,Fili and kili go on a war chariot to get to Raven Hill, this s what I have based the set on. I am planning on adding some more rams and orcs riding on wargs to the set. Right now only Thorin is riding on a ram.

This set seemed cool to me because it is a extended scene. It was a action scene with battle and loads of characters. This would make a pretty good set when I update it because it will have a few orcs,Thorin,Balin,Dwalin,Fili and Kili who are all the best warriors out of the company,it also comes with a dwarven war chariot and a few rams when it is updated.

Here is what it will come with once it is updated.

8. two or three orcs on wargs