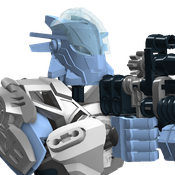 Hero Factory Team Cutlass is a specialist team from the Hero Factory made up of 5 of it's highest ranking operatives, even above Stormer. The team consists of Frederick Maximus, Ethan Jackson, Merrick Fortis, Desmond Thresher, and team leader, Kiara Ryker. All of the heroes on the team have previously been mentioned or have made minor appearances on the TV series and/or other promotional material, and all the designs are based on background characters from the TV series, with the exception of Fortis and Thresher, whose designs are based on their physical appearances from Rise Of The Rookies and the Hero Recon Team promotional video.