The ambush of Zemo 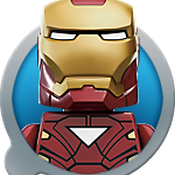 This project was created on LEgo Digital Designer, there aren't other brands's bricks

"The ambush of Zemo" is a new set that I created. I will create a new collection of set, called "Captain America" on the captain in the Second Global War. In this all sets, the captain fight "Hydra", a terrorist organization. There is a little Hydra's headquarter in the all set. When you will have them, you could create a big headquarter.

The story: The Captain Rogers stole a Hydra's car to go in an other Hydra's headquarter. Because, in this other headquarter, Hydra is creating new though armors (that's why, there is a Hydra henchman of Avengers

: Age of Ultron"). But Zemo readied a ambush for our captain.

In this set, there are:

I want you to love my set !